The Zilliqa research team has significantly increased its hiring, and there seems to be a heavy emphasis on gaming. The team has been developing a Software Development Kit (SDK), allowing developers to build games on the Zilliqa ecosystem. The Zilliqa Research SDK is not the first SDK on Zilliqa; BLOX was the first project that experimented with the SDK concept and launched its SDK last year. Unfortunately, the BLOX SDK didn't get the traction it aimed for. The Zilliqa Research team seeks to avoid that issue by creating a showcase game. The first game, made with the SDK, will be a First Person Shooter (FPS), graphically comparable to Overwatch. The game utilizes a cartoonish art style, that is accessible and appreciated by the gaming community (e.g. Fortnite). The innovative aspect of this particular game is the win-to-earn mechanic behind it. The game utilizes a win-to-earn mechanism, whereby players get rewarded if they win (e.g. win a game). Therefore, the game promotes skill, whereby the top players can earn more rewards than casual players. Consequently, eSports are more straightforward to integrate due to a social and financial incentive, and existing eSport partnerships (i.e. NIP) can be leveraged to accelerate eSport adoption. Thus, creating a loyal community and significantly improving the adoption probability of traditional gamers.

The game will be a showcase game, showing players and developers the SDK possibilities and the Zilliqa ecosystem. This allows the team to convince game studio's to build on top of Zilliqa instead of as a direct competitor. Regarding game studios, the team is actively engaging with multiple venues to get them to develop games on Zilliqa. 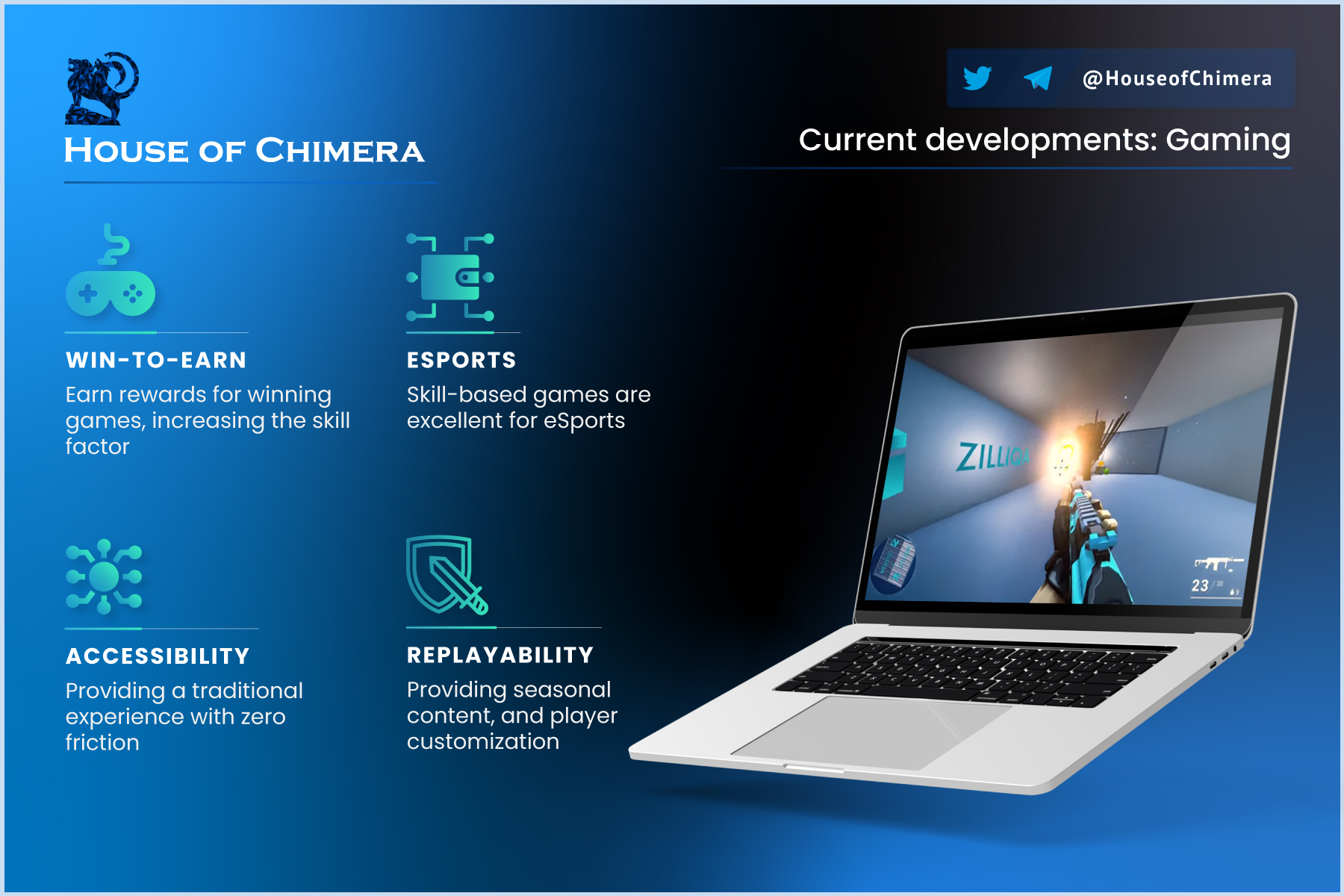 Many gamers commonly agree that Steam is one of the most convenient marketplace/gaming libraries. Before Steam, you had to go to the psychical store to get your favorite games which were not as convenient considering popular games were not always in storage. Thus, the overall accessibility of games drastically increased, and consequently, the number of global gamers has skyrocketed in the following years. It is estimated that there are 3.24 billion gamers, meaning that approximately 40% of the worldwide population does at least occasionally play a game.

We genuinely believe that if blockchain games can get more accessible and meet traditional industry standards, there is a place for these games. However, most blockchain launchers/gaming libraries are currently not convenient, cumbersome, and not multi-chain. Zilliqa is playing around with the idea of having its gaming hub, allowing developers to launch their games quickly to a large audience. It essentially minimizes the friction between the traditional gamer and blockchain games. Furthermore, Zilliqa could leverage its eSport partners to launch the gaming hub as an alternative for Steam with solely blockchain games. Especially considering Steam does not allow cryptocurrency games per policy; hence, this could be the chance for Zilliqa to stand out in the blockchain space. 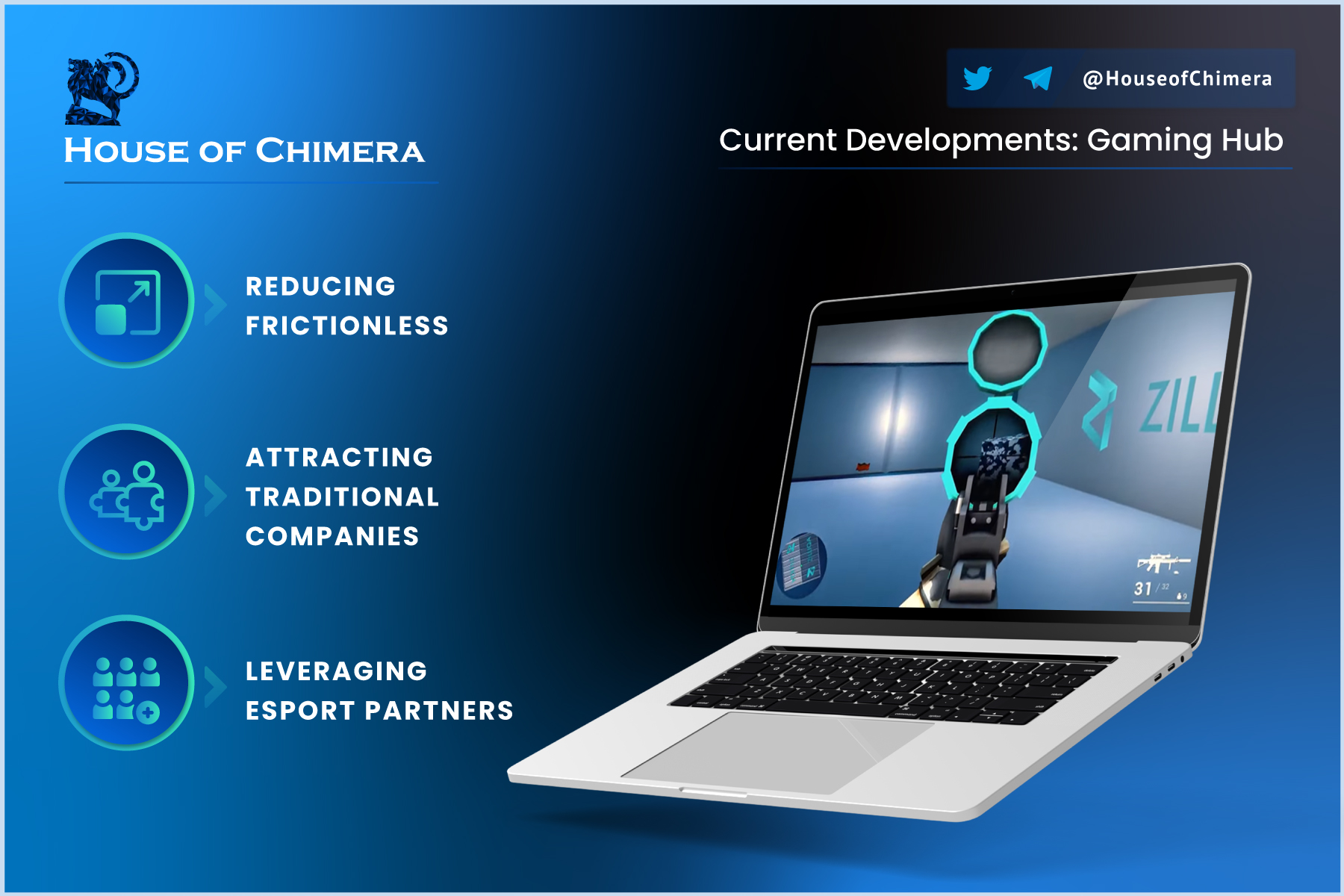 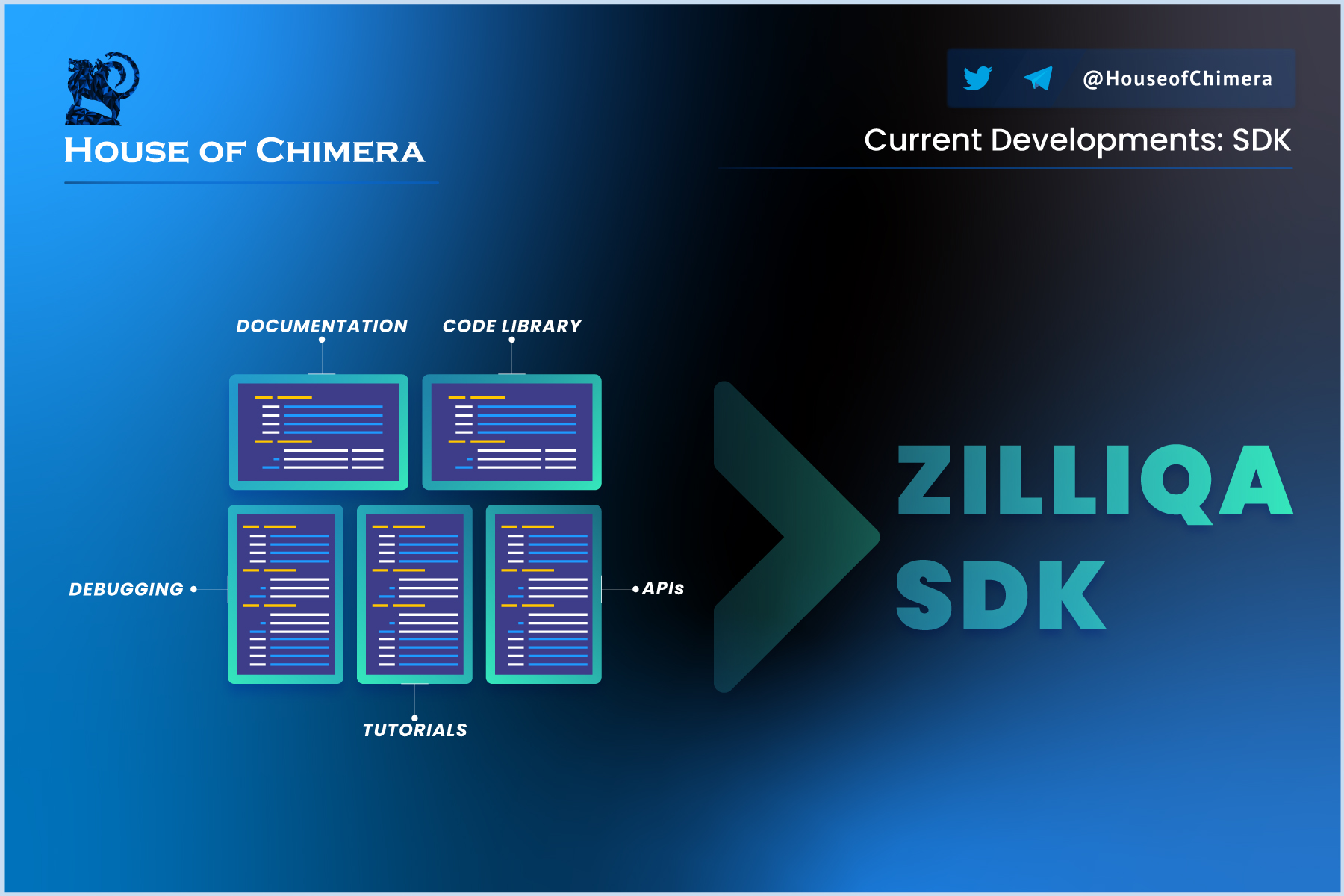 The Zilliqa ecosystem had some rough times in the last few months, which negatively impacted the credibility of the ecosystem. However, despite the team changes and other unfortunate events, the ecosystem is growing in social growth. The overall investor sentiment seems to stabilize around the 92 out of 100 mark, relatively high—additionally, the Lunarcrush Alt rank decreases, which means that the widespread interest in the ecosystem is rising. The same trend is observable in terms of Relative Social dominance, which has significantly increased in the last two months. A fascinating insight is that the Relative Social Dominance is heavily correlated with the number of Unique URL shares, meaning that sharing unique URLs have a relatively significant impact on the overall reach of the ecosystem. Thus, the community can significantly help the ecosystem's social growth by sharing meaningful URLs and essential news. 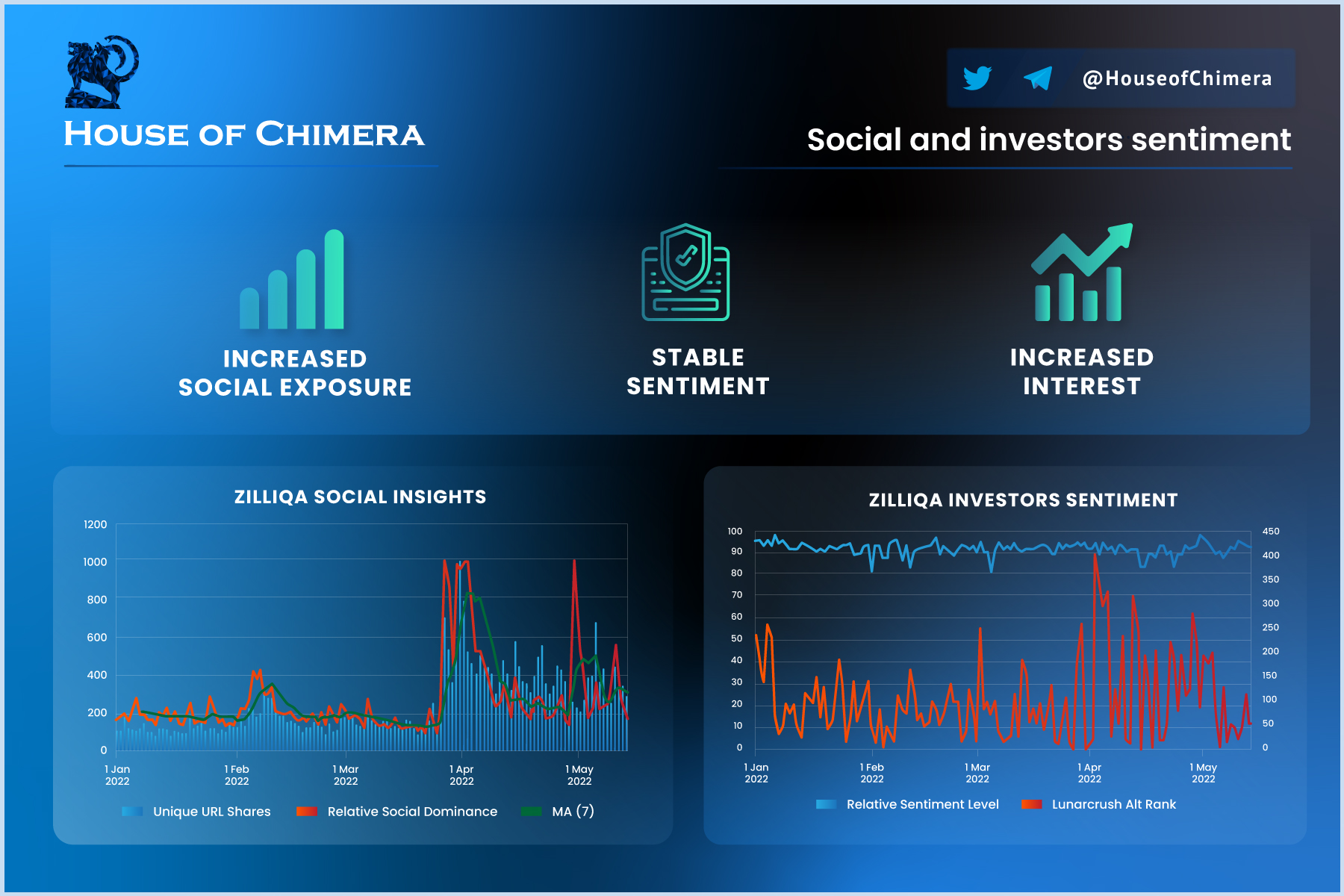 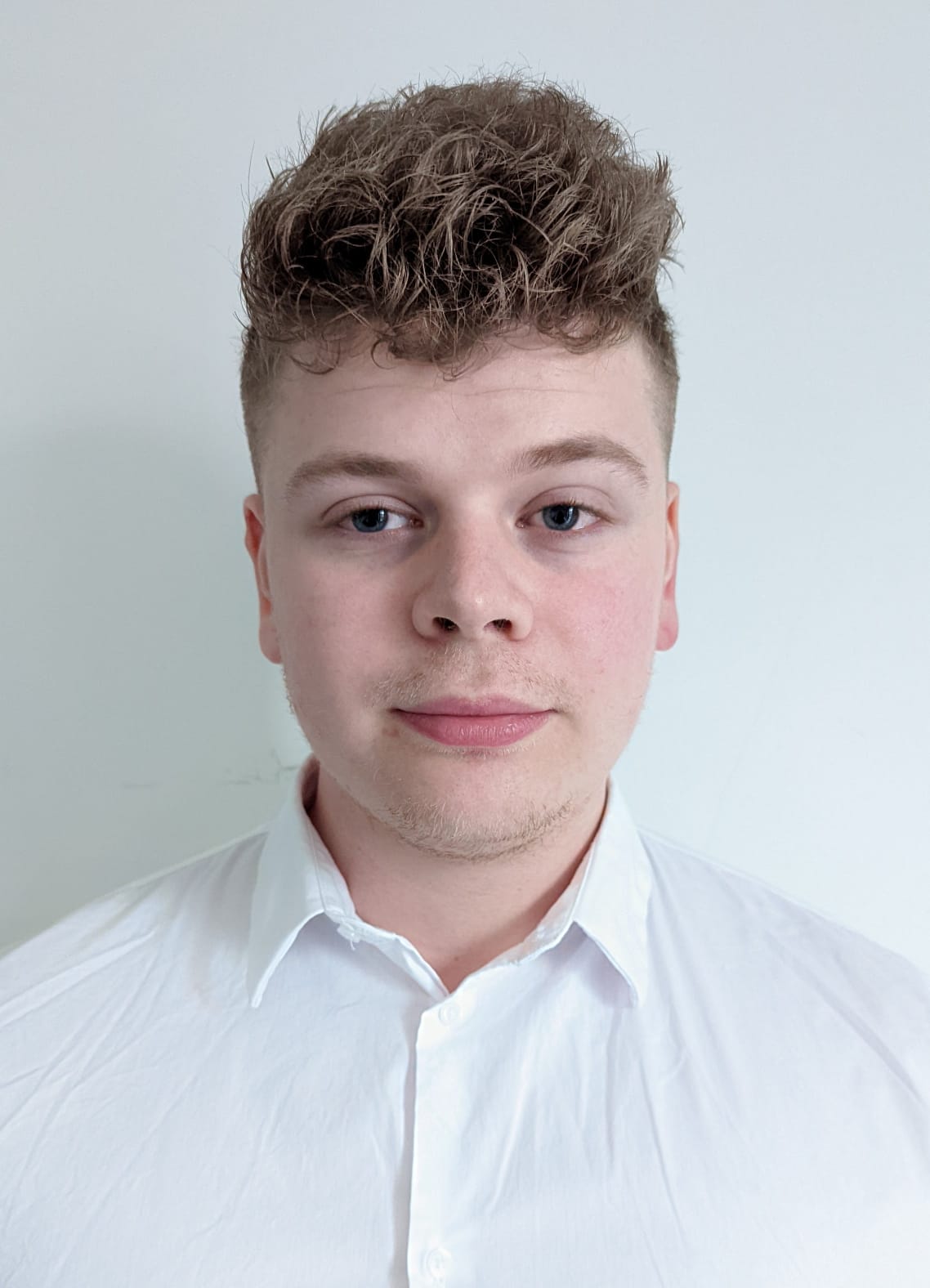